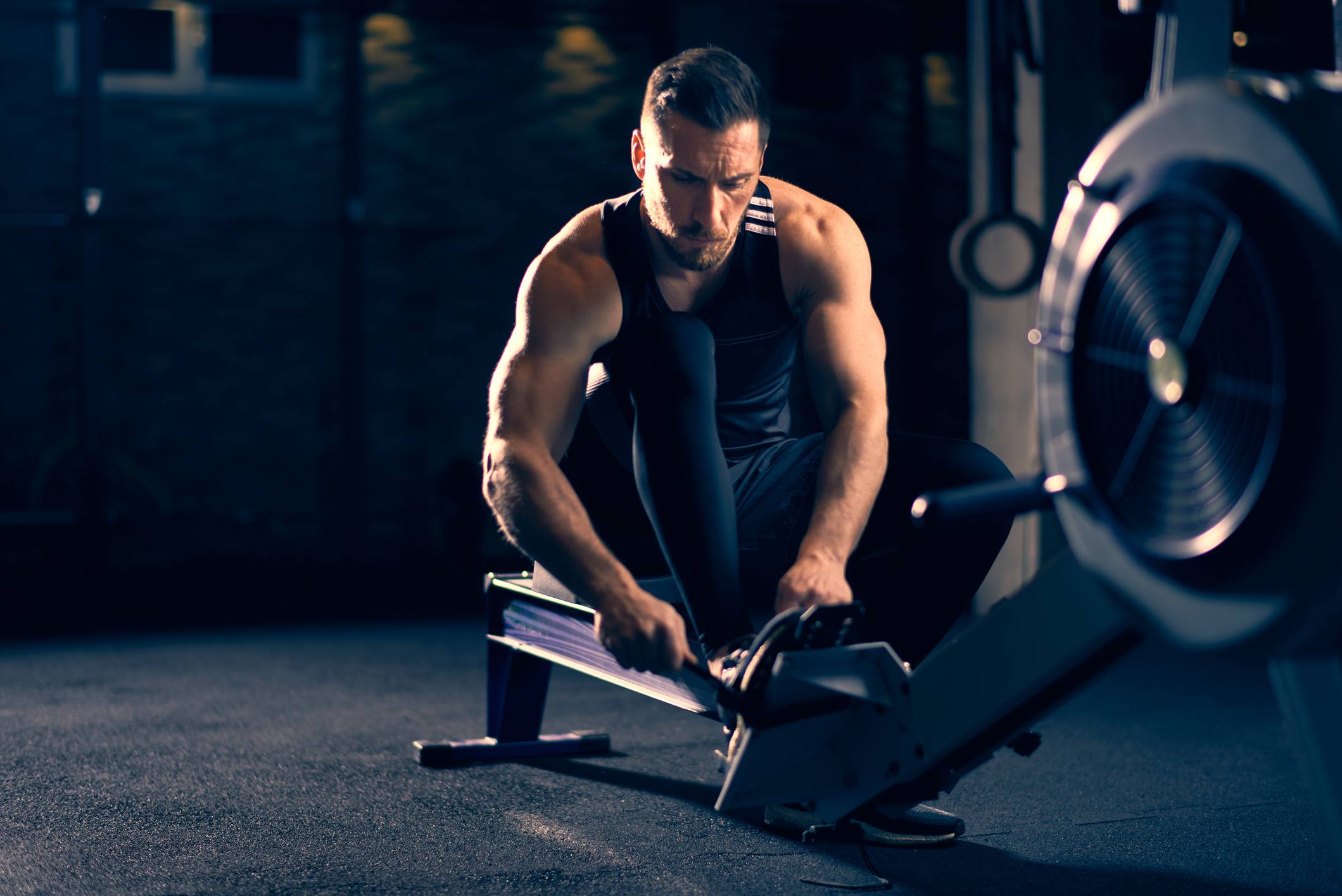 You can never be too quick with moving your hands away from the finish of the erg  rowing stroke.

Not only does it help rhythm and power towards the finish, but if done correctly it can really set you up for the next stroke by recycling some of that dynamic energy built up during the power phase.

Use the speed and energy of your hands away from your body to swing your body over the hips. A lot of Ergers make the mistake of not moving the body past vertical in the recovery phase.

This is especially important if you are a rower. Most of the time rowing Ergers will really emphasise the separation of the hands, body swing forware and slide on the recovery phase.

That’s fine if your game is proper rowing technique. But on the erg this is a waste of time and energy. The idea is to keep recycling the energy dynamically. If you delay or make a sticking point along the stroke cycle then it’s just wasted energy.

4 – Be set up and ready for the power phase.

5 –Take it easy on the easy phase.

When it’s easy make it easy. In other words when you are going up to take your next stroke allow yourself to take it easy. Taking it easy doesn’t mean taking it slow. RELAX. If you can learn to relax then you will save A LOT of energy.  Even by just by thinking ‘easy’ makes the blood flow and mind feel strong.

6 – Use the easy phase to make the power phase easier.

This is one of the most important tips you will read at erg rowing.com Most rowing coaches will never mention it because they don’t even know it exists. Most average rowers don’t know about it. The top Ergers however DO know about it.

You won’t  see it by watching YouTube. You won’t even see it at the CRASH B’s. It’s so imperceptible that it’s almost invisible. You just have to know it exists, find it, feel it and use it. I’m talking about recycling dynamic energy. If you find it you can save unbelievable amounts of energy and when you get the feeling you won’t let it go.

To find it you need to approach the beginning of a new stroke with perfect speed. It’s a very subtle feeling. A lot of rowing coaches will say that you need to slow down the seat as you go for a new stroke. Recycling dynamic energy demands that you actually maintain your seat speed or slightly faster.

When you do it correctly and you hit the next power phase you will feel a reduced load with the same split or even lower. I don’t have percentages, because I can’t measure it but take it from me, once you can hit this sweet spot, you will save yourself a lot of pain. Remember recycling dynamic energy.

Another way of thinking about it is to keep the wheel spinning. Feel as though you are tapping the wheel along. You are not ‘muscling’ the handle on the power phase.

Recycling dynamic energy is closely related to rating which I examine below under rating.

To get the most from this sequence you need to follow the advice in the next article very carefully.

Have you ever watched the Romanian Women’s 8 in full flight? Here they are in the 2008 Olympic Final.

When they were at their best, watching them rowing was something to behold. It was truly unique – and deadly effective. Their results speak for themselves.

But their rowing style and technique really defined them.

At its most simple – they moved their hands very fast away from the finish of the stroke and followed with a really fast body swing forward. Then the slide was taken very – very slowly (in proportion to the hands and body movement). They crept  up the slide as slowly and delicately as possible. (You can relly see this at 4:54)

Look at the overhead shot at 1:05 in the video. Watch out for the speed of the blades on the recovery of all 6 crews. Notice how quick the Romanian blades move off the finish and then slow dramatically in the slide forward.

And you know what?

They did the same thing – whether they were at 36 strokes per minute in the middle 1000 meters of the Olympic Final, or out for an easy training session during a World Cup Regatta.

Watching them train was great and was a real chance to see how they rowed their boat. The contrast between the hands & body speed and the slide speed during the recovery was almost unbelievable.

It was almost like they were doing a stop drill exercise -where you stop at various points during the recovery to help with timing, balance, co-ordination and all round general technique.**

Anyway – the point about the Romanian Women’s 8 is that they had a particular way of rowing their boat. And it wasn’t just confined to the 8. At the Sydney Olympics in 2000, the bow and stroke of the 8 teamed up to row the pair.

Which they won gold to match their Gold in the 8.

Do you remember the Oarsome Foursome? If not – here’s a really great video of them training in 1996

See how they are much slower with the hands away?

But see how fluid they are after that initial ‘set’ point.

Look at how they just roll up into the front and into the water with the blades – in one fluid seamless movement.

I’m sure you’ve heard before that the catch is the ‘last thing you do on the recovery phase’? (or something similar). This rowing is a perfect example of that movement.

Important Features of Both Styles

Hands: Really Fast away from the finish.

Body: Follows the speed of the hands (quick)

Slide: First quarter on the recovery is quick. But then it slows dramatically.

Catch: After the very slow slide the blade drops in quick and the change of direction with the slide (and the engagement of the legs is dramatic.

Leg Drive: Go down hard and the body remains forward. The whole of the drive phase is very horizontal. See how low and level they move their bodies towards the bow? It looks like their whole style is based on not disturbing the boat run (in both the recovery AND the drive phase).

Back swing: Very dynamic through to the finish (which helps a fast spin of the hands away on the recovery)

Hands: Deliberate and controlled way from the finish. The guys sit very still at the finish with toes pointed, knees flat, core braced and the only things that move are the hands. See how they all meet at a point together?

Body: Controlled – and a noticeably separate movement from the hands. Very different from the Romanians where the hands and body move almost together.

Slide: Very fluid, direct and deliberate. Notice how well they match the slide speed with the speed of the boat.

Catch: Part of the recovery.

Back swing: Compared to the Romanians the back swing in the Australian Boat is much more ‘even’. Sure they open up hard together towards the finish, but they don’t over rely on the legs-back separation in the drive phase.

The use both together.

But notice how dynamic the finish of the drive is: The back and arms move faster as the momentum, power and boat speed increase towards the finish.

It shows excellent timing with the movement of the boat.

So Which is best?

It’s up to you. I been directly involved with crews rowing both styles at a serious level for a long time. We spent 2 whole seasons trying to row the Australian style and spend 5- 6 seasons rowing more like the Romanians (but not as extreme).

The crews I was involved in went fast with either style – Top 7 in the world fast.

What you can try…(and why)

Aim to purposively build the boat speed towards the finish.

Release the blade and feel your boat run.  Make sure you brace and sit still on the finish and don’t disturb your boat.

Be very careful though. The oarsome foursome match the slide speed forward with a quick catch and connection. So for you to do it right, you need to match this.

Rowing the Romanian Style is a little more challenging in my experience. It’s a bit like walking a tight rope. Once you are moving and are in the groove then you are ok, if you stop moving or break the rhythm they you could be in trouble.

It also requires good control and flexibility – especially with your hips, hamstrings and lower leg joints and muscles.

Creeping up the slide is the balancing on the tight rope part – but the dynamic drive and lightening quick hands – body  – first quarter slide creates a nice rhythmic momentum that will carry you a long way up the slide towards the catch.

It’s kind of like sting and float – with a high work to rest ratio.

It works on the erg too

You can try either of theses techniques on the erg. Study both videos and decide which style you think will work best for you.

** Actually this is one of the best rowing drills you can do to get your boat going well. Whether you are in a crew of 8 or in a single scull or are on the erg – it truly is a worthwhile drill.

P.S. Drew Ginn is the bow man in the Australian 4. He runs a great blog and site called rudderfish – which gives us all a really unique insight into the world of a multiple Olympic Rowing Champion.

I’ve had a lot of back problems lately. I’ve been seeing a couple physiotherapists and back specialists to try and solve the problem. They all say it’s the same thing.

I never knew there was such an ordinary language medical term. Whatever it’s name, the worst thing is that it could have been prevented.

Sitting writing this article I’m aware of 2 things – what I’m writing to you and how I am sitting. 6 months ago I would have been only aware of the way I was writing. END_OF_DOCUMENT_TOKEN_TO_BE_REPLACED

Erg Technique (Do Not Read This If you Are A Rower)

Have you ever thought that there might be a difference between rowing technique and erging technique?

Rowers and Rowing Coaches be warned. You may not like what I’m about to say, but…

The number of technique flavors for rowing boats are as numerous as there are coaches.
But the fundamentals remain the same for most. (basic movements in the drive for maximum propulsion and basic recovery movements for minimum disruption of boat speed)

What about erg technique?

Do you have a different technique for erging?

You should. And here’s why.

Some Rowing Fundamentals Do Not Apply To Erging

Some Rowing Technique Is Essential For Good Erg Technique

So What’s The Best Erg Technique?

The most effective and efficient erging technique requires

Think about these 2 requirements the next time you are erging and see if you can come up with a good system suited to your body, style, fitness, experience and needs.

But it goes without saying that if you are a rower, you should erg like your coach wants you to. If you don’t have a coach you should at least try to erg with a rowing technique leaning towards rowing. (Keep the basic movements on the drive and recovery phase as close to rowing a boat as possible).

All things considered if it’s fast erg technique you’re looking for then consider what I’ve outlined above.

I will write an article very soon on how I think you should erg if rowing technique is not an issue for you.